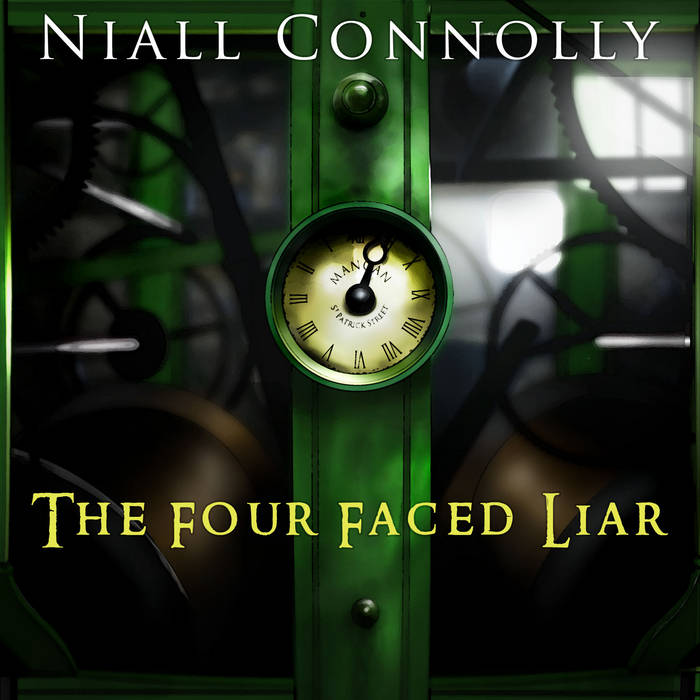 “I picked ‘The Four Faced Liar’ and ‘Corridors’ as the two songs to release now because they probably best encapsulate the different sides of my music,” says Connolly. “I wanted to juxtapose an uptempo band number with a more introspective song, to help provide a good sampling of what we’re working on now.”

The two songs represent different aspects of what Connolly sees as a strong sense of place in his life. The driving rocker ‘The Four Faced Liar’ references the Church of St. Anne, in Connolly’s hometown of Cork, Ireland. The church’s famed Shandon Tower has four separate clocks that rarely, if ever, tell the same time. Connolly, who once lived a stone’s throw from the church, says that the tower’s unreliable timekeeping is a source of both amusement and pride to locals. But the tower also serves as a reminder of Connolly’s early days, playing music with friends, listening to Nirvana, Pavement, and The Violent Femmes, and seeing local bands like the Sultans of Ping and The Frank and Walters at the legendary Sir Henry’s nightclub.

‘Corridors,’ by contrast, is a sparse, finger-picked acoustic number that recounts Connolly’s more recent life in Brooklyn. The song started to take shape during late nights of returning home from gigs, walking into his apartment building, and hearing a neighbor’s crying baby. “Here I was coming home from the subway with my guitar, and their baby is crying. Those people live just a few feet away from me, and they’re in such a different place in their life.”

Connolly’s hard work and frequent gigging has paid dividends, though. In addition to SOUND being the fastest-selling album of his career, it has helped him earn rave reviews in such diverse publications as The Chicago Tribune, No Depression Magazine, and The Irish Independent. And thanks to lengthy treks throughout the U.S., along with four European tours, he’s played through 11 different countries since the album’s release.

The repeated touring has presented some genuinely surprising moments. At a gig in Denver, Connolly says the fiddle player in the opening band looked familiar. After his own set, Connolly said the fiddle player approached him, praised his songs, and offered his services for future recordings. “It was Gordon Gano of the Violent Femmes,” Connolly recalls. “He gave me his number on a scrap of paper. I framed it.”
At a gig in Glasgow, Connolly says he looked out into the audience and saw Belle & Sebastian's Stuart Murdoch. “He sent me a photo recently. It was a picture of his son wearing a Niall Connolly/SOUND t-shirt, which I thought was really cool.”

Connolly chuckles at some of his road adventures but says that he’s equally honored by the efforts of his friends and fellow musicians in the loose scene known throughout New York City as ‘Big City Folk.’ In 2012, a dozen singer-songwriters released ‘aNiallated: A Big City Folk Tribute to Niall Connolly.’ Connolly says he was incredibly moved by the gesture. More recently, Connolly was invited to perform the Irish national anthem during a gala Manhattan event for the Irish Arts Center, featuring such luminaries as Gabriel Byrne and Daniel Day Lewis.

And then there’s the unexpected satisfaction that came when fans started posting YouTube videos of themselves singing Connolly’s songs. “I started to get emails of people singing ‘Samurai.’ People in France, Germany, and Ireland have been doing this thing of videotaping themselves while driving around and singing along to my song on their car stereo. I love the idea of my songs becoming part of people's road trips and memories."

Connolly plans to have a new album completed by early 2015, and has been enjoying his work with the same bandmates who made SOUND such a success. In addition to work with multi-instrumentalist and producer Brandon Wilde, Connolly continues to collaborate with drummer Len Monachello, guitarist Warren Malone, trumpet player Dennis Cronin, and guitarist Chris Foley. There’s also a continuity with some of his earlier recordings and performances thanks to trans-Atlantic sessions with Tipperary's Karl Nesbitt and Glasgow-based Michael John McCarthy.
Of the upcoming album, Connolly says, “We’re working on more than 20 songs and plan to whittle it down to 11 or 12 songs, including those two, for the final album.”

There’s little rest ahead for Connolly, though, and he expects to tour the American northwest in February, followed by another European tour in March and April. In the meantime, he’ll be hunkering down in New York, where he’s currently ranked #1 in ReverbNation’s folk charts, to finish recording his new album, and to unveil his new single at Rockwood Music Hall on November 22.

from the forthcoming album out in 2015.

Nightmares on Wax and Bremer McCoy stop by with their sublime new LPs.